Southern Gauteng and the Northern Blues had already virtually secured their places in the semi-finals of the SA Women’s Hockey U21 IPT, with the battle really being to see who would seal top spot in the pool. The team with the first chance to stake a claim for the position was Southern Gauteng as they took on WP Pens in the days opening game.

In a tight tussle they thought they had done enough when they went ahead with a Reabetswe Phume goal on the verge of the third quarter hooter. But Morgan Barnard scored with 4 minutes remaining on the clock to seal a point and open the door for Northern Blues to take top spot.

Like a Miley Cyrus infused wrecking ball they bashed straight through the door winning 8-0 over last placed EP Settlers. There were two goals for Kiana Cormack and Bulelwa Mzimela while Laiken Brissett, Cerian Fourie, Emmere Steenkamp and Alexis Terblanche all added to the demolition job.

In the last game of the group, Free State secured a 3-0 win over Pens to leapfrog them into third spot in the Pool. Tuan van der Westhuizen, Taheera Augousti and Chemelda Ontong secured the victory for Luke Makaleni’s team.

Western Province secured their semi-final spot with the solitary goal by Malikah Hamza being enough to hold onto a tight 1-0 victory over North West. Leaving a spot in the semi-finals for either the KZN Raiders (Needing only a draw) or Eastern Province.

It would be the Raiders that secured the game not looking back after an early Jessica Rochat goal and felt safe when Rethabile Mosemaka added the second. It would take nearly 30 minutes for the final goal as Chelsea Layden added some gloss to the score line and secured the Raiders top spot in Pool B. 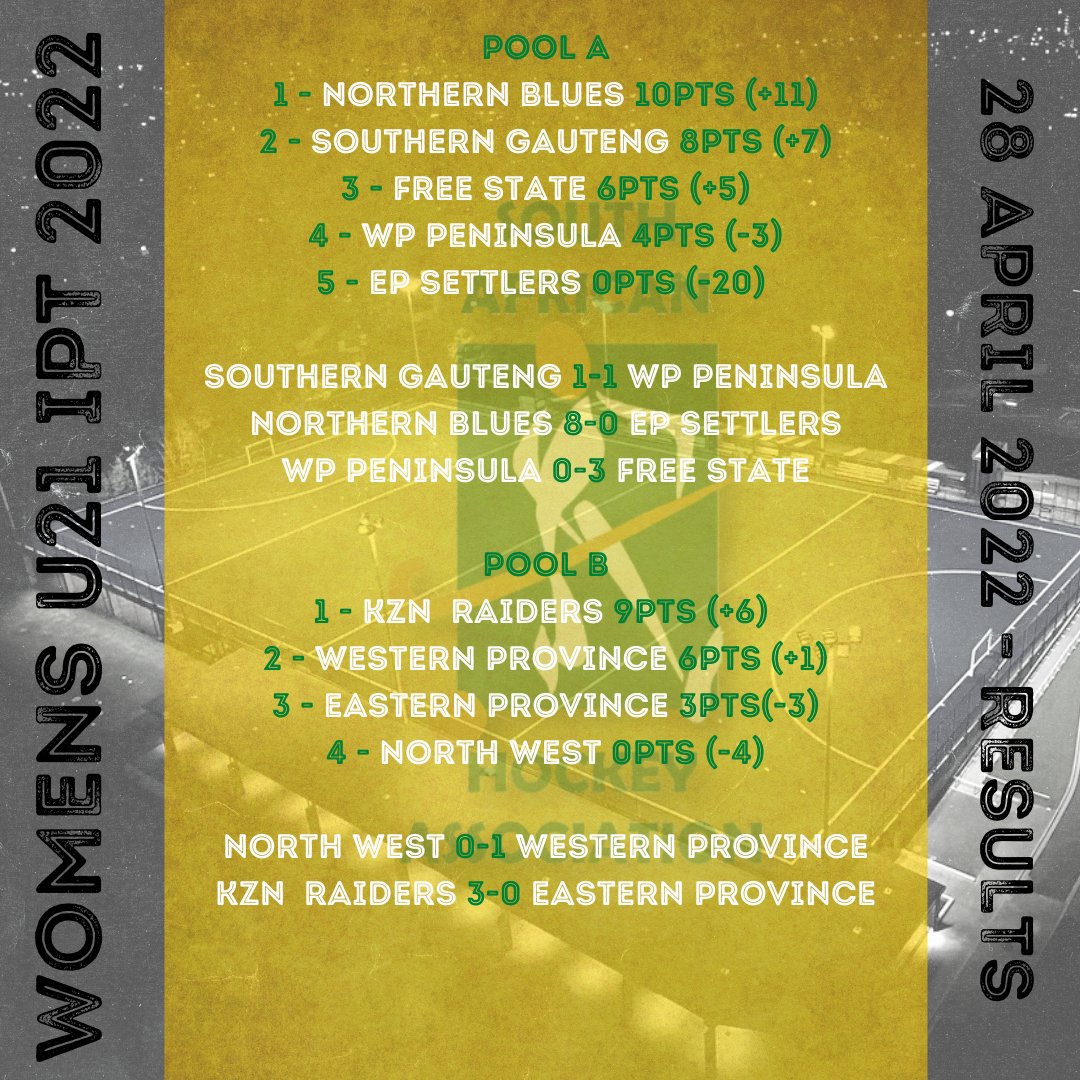 The Northern Blues continued in their quest to add to their 2019 title with a tough but convincing win over Free State. They led early through Kenny Kgongwane and added a second through Joshua Davies. Free State pulled one back heading into the final 10 minutes, but Cameron le Forrestier put the game to bed like a parent taking away a child’s toy.

They will be joined in the semi-finals by the hosts Eastern Province who were pushed all the way by SG Wits. Joe Sincock scored EP’s goal while Ethan Matkovich levelled for Witsies and that was all the goal action we would get. It would go to a shootout where Silindele Nobadala was the hero not being beaten while EP Scored three from three.

Western Province followed the script perfectly in a 6-0 victory over North West. They scored in the first minute through Damian Knott and systematically added to the score line throughout the game. Andrew Pick, Thomas Sickle, Caleb Oliphant and Hans Neethling (2) finding the net to secure a spot in the top 4 and a mouth-watering semi-final against Southern Gauteng.

Southern Gauteng of course made their way into the Semi-Final through a sensational first half of action. Keegan Figueira, Travis Krumples and Luke Lourens made it 3-0 at the break. The Raiders came out swinging pulling a goal back through Callum Osborne, but their Sails were ripped when Lourens added his second to make it 4-1 and seal elimination for the Raiders. 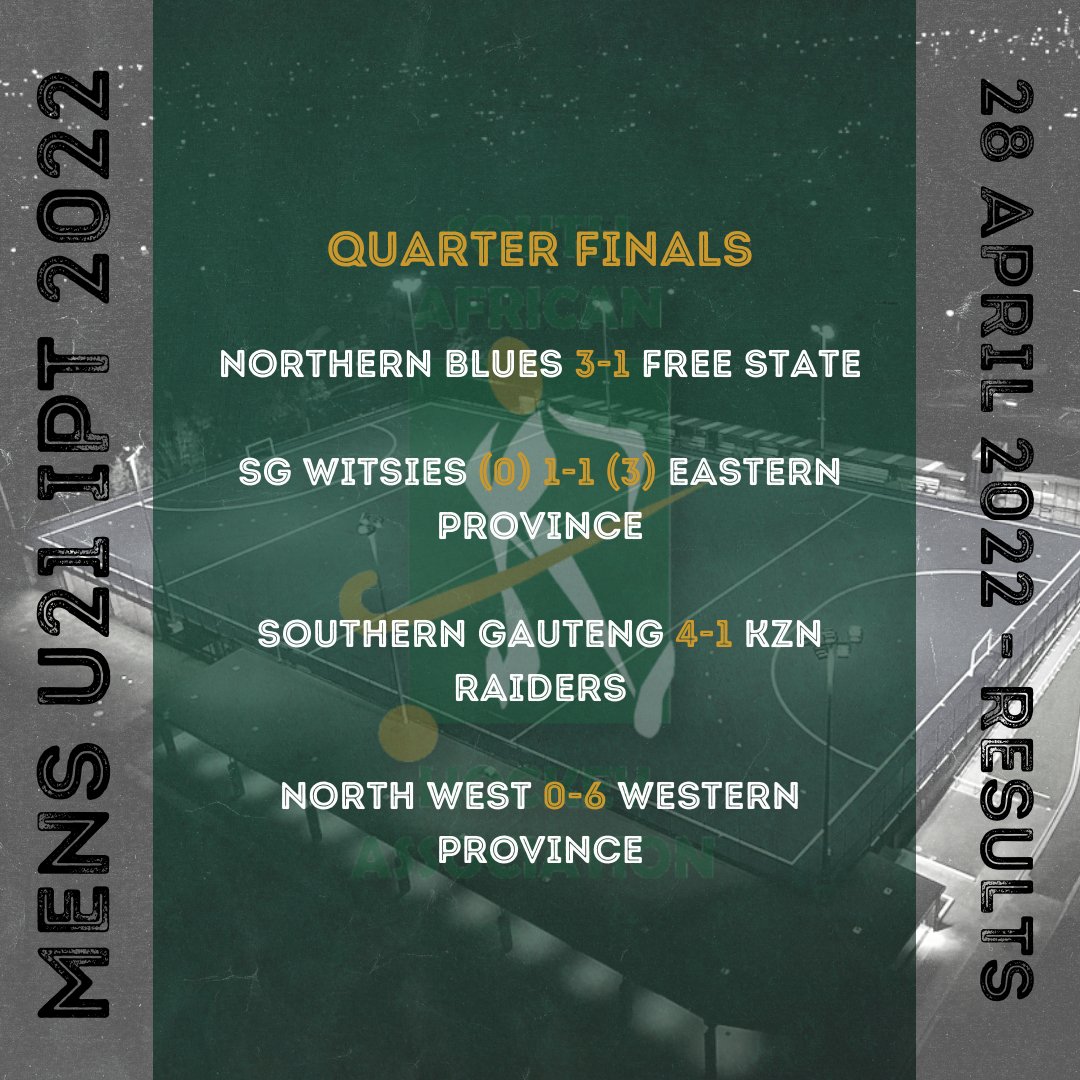 Semi-Final Action tomorrow before the champions are decided on Saturday!