UNDER 21 IPT | Mens QF line-up finalised, while KZN are tops in the women

The third day of action at the SA Hockey U21 IPT 2022 in the Eastern Cape saw the Men's tournament complete the pool stages and set up the quarter-finals, while the KZN Raiders are the only womens team with a 100% record so far.

The KZN Raiders jumped off the bottom of the table to secure their first win of the tournament as they beat the SG Wits side convincingly. Darryl Lotter, Dylan Ebrahim, Tyler Tomsett and Callum Osborne all netted for the coastal side, while the consolation for Wits came from Aidan le Fleur. The win saw the Raiders leap frog Wits and in so doing secure the "easier" quarter final.

Northern Blues continued to underline their title credentials with a dominant dismantling of North West. They took the lead in the 6th minute through Joshua van den Bergh and never looked back as methodically they added goals throughout the game. Ethan Song, Cameron le Forrestier and Thomas Dixon each netted one, while a brace for Calvin Davis sealed six of the best for the 2019 champions.

Southern Gauteng secured their own first win of the tournament with a hard-fought 2-1 win against Free State. Ryan Mann and Tebogo Maseko set the Gauteng side up for victory but a late Nhlanhla Modibela goal set up an anxious finish. Holding on for the victory meant that Southerns finished third in the pool while Free State remain pointless and finish bottom of the pool.

Western Province were able to leapfrog the hosts thanks to a fantastic 3-0 victory. They scored through Hans Neethling, Thabang Jeyi and Corben O'Ryan. The results sees Province top Pool B as EP have to settle for second and a mouth watering clash with Southern Gauteng. 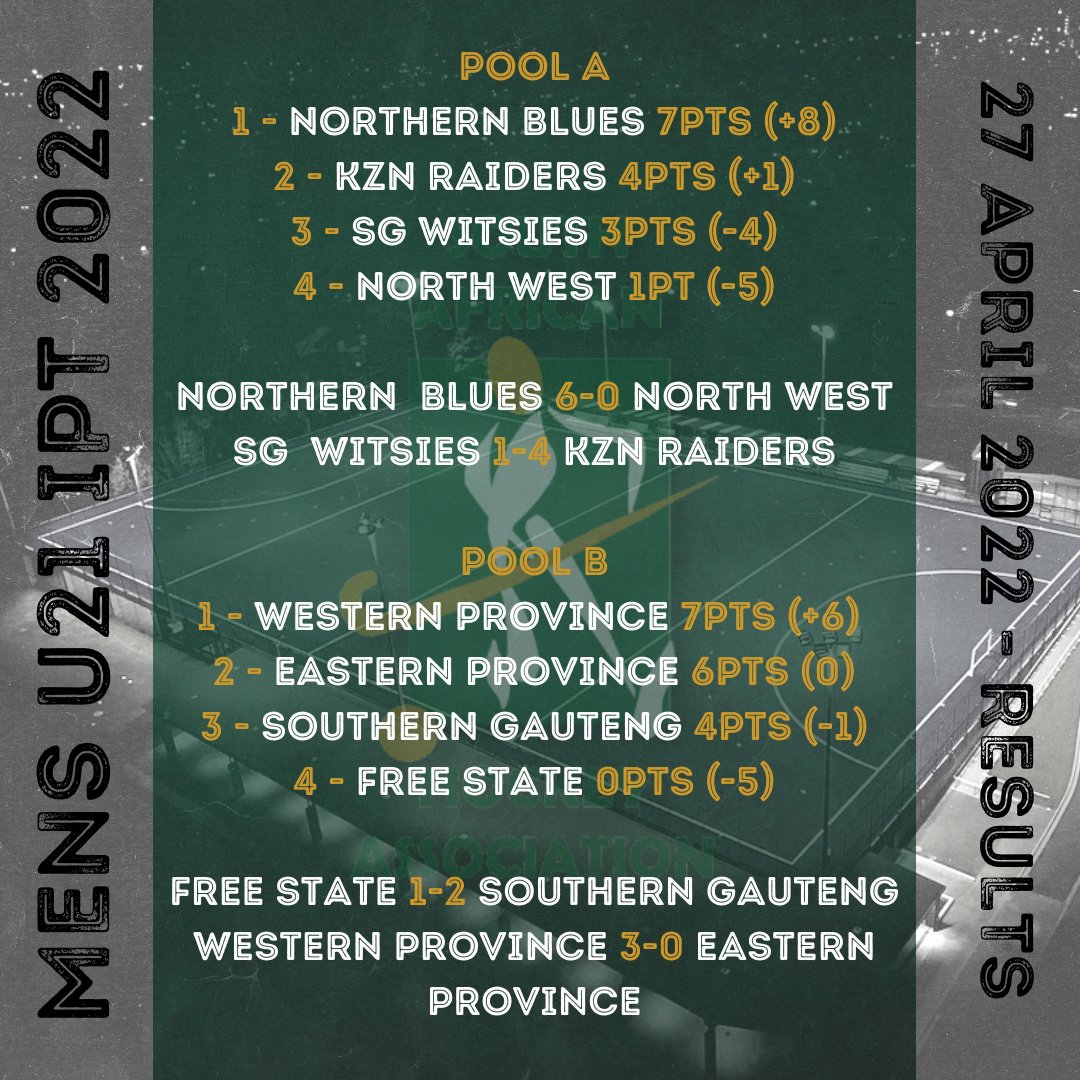 In two hours of hockey, the Northern Blues women supporters saw just one goal as the team finished the day with four points out of six. That came thanks to a goal in the first minute of their first game by Kiara Fitzhenry scoring against Free State. The next 59 minutes saw no goals, while a goalless draw against title rivals Southerns kept both teams very much in the conversation going into the final day of the pool stages.

Mathematically WP Pens can still catch the top two and secure a semi-final spot, thanks to an Erin Coetzee brace that sealed a 2-0 win over the EP Settlers. They will have to win both games tomorrow against Southern Gauteng and Free State to sneak into the top 4. Free State themselves had a moral boosting 4-0 win over the EP Settlers having lost their opening two games.The goals coming from Kayla Olivier (2), Izaiah April and Zelmari Pretorious.

Eastern Province gave the home faithful some moments of cheer as they kept alive a semi-final hope by beating North West 3-1. Isabelle Bisdee, Chelsey Cooke and Lily Sharp were all on the scoresheet before a late consolation goal from Michelle Claasens dented the goal difference for the hosts.

KZN Raiders have one foot in the Semi-Final following a superb 3-1 victory over Western Province. They led early through Emily Macquet but the Capetonians pulled one level through Jenna Fyvie. Tasmin Anderson restored the advantage before Olivia McDonald settled the game with a final chukka goal. 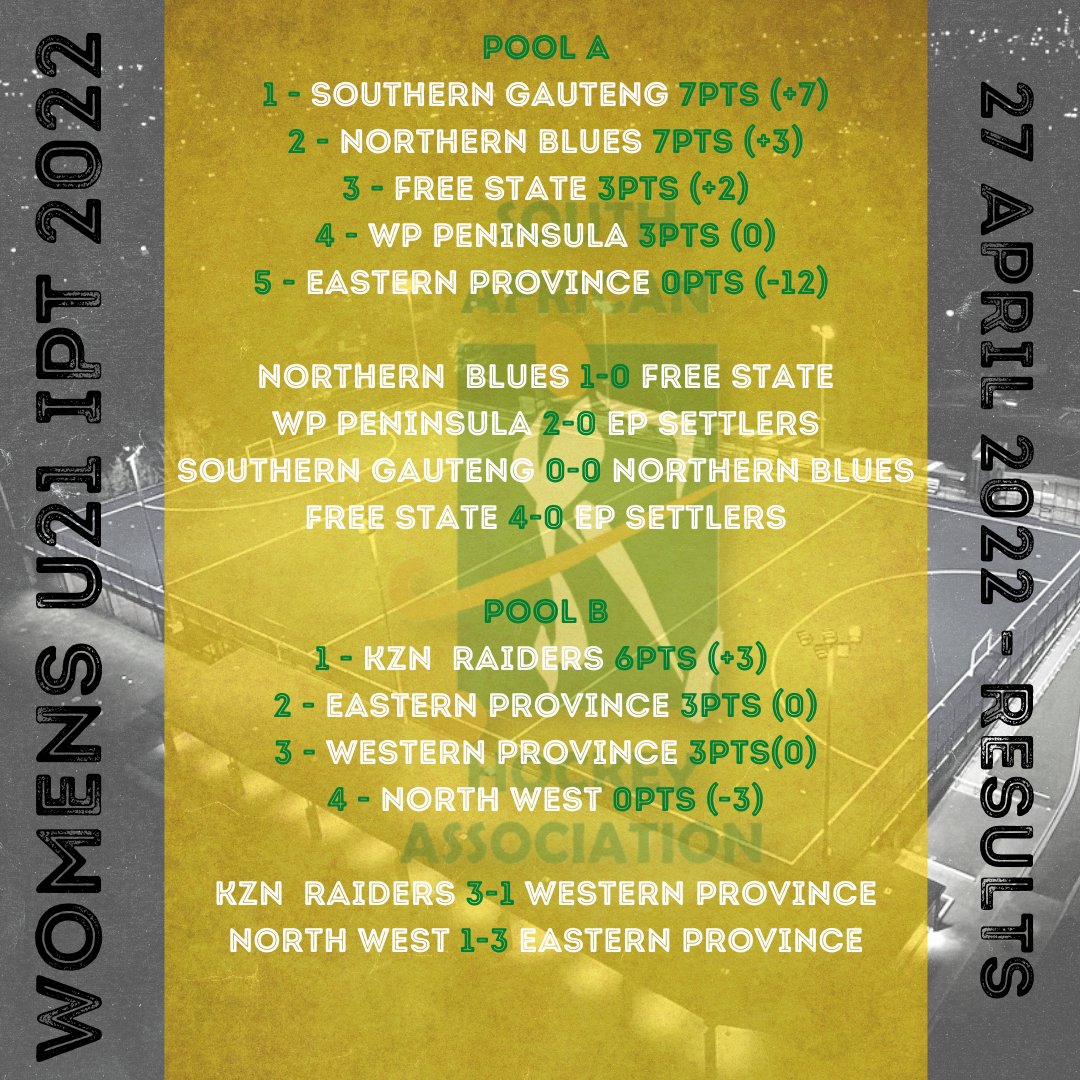