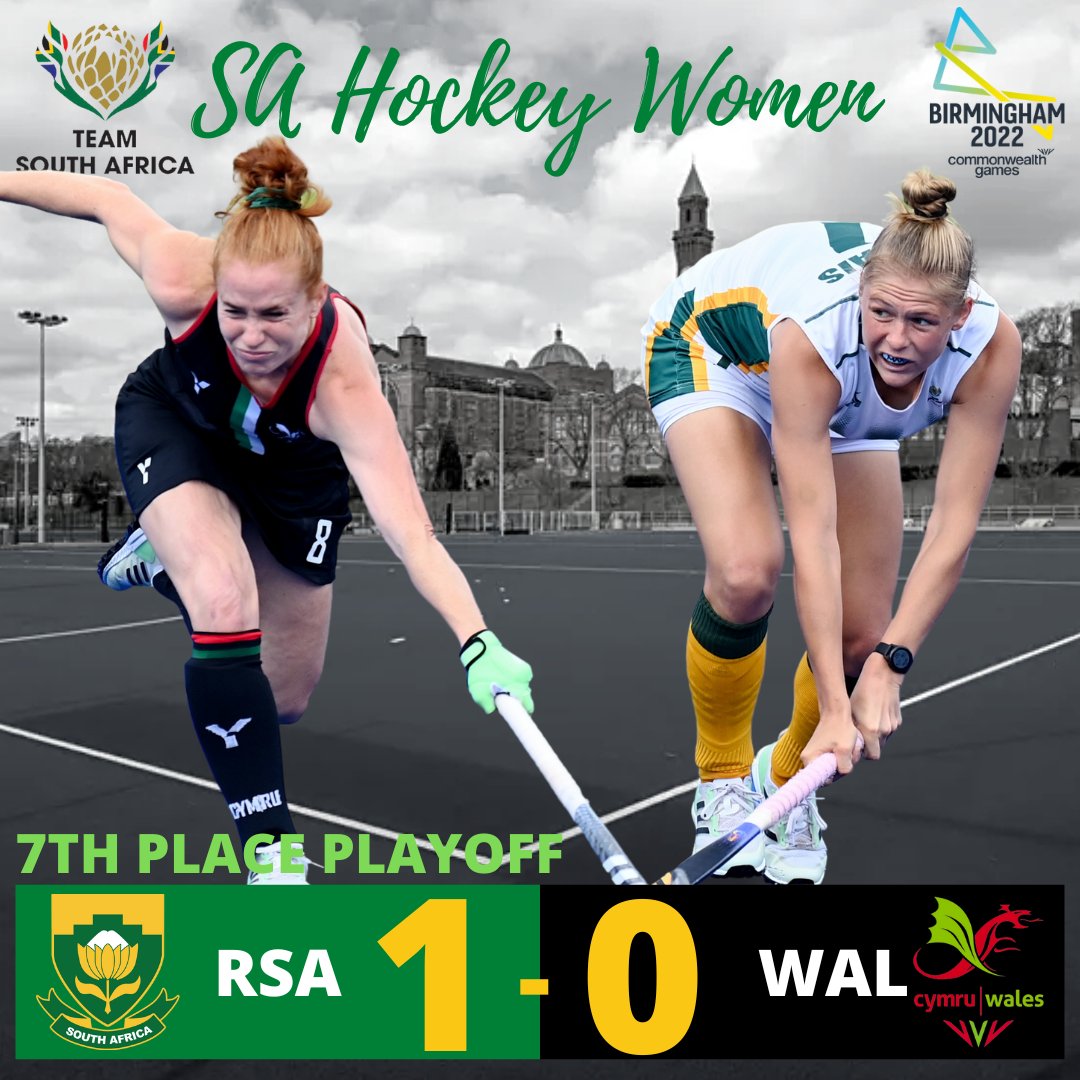 South Africa scored the only goal of the game as they confirmed a 7th place finish at the Commonwealth Games. Lilian du Plessis finishing off a wonderful team move was the difference between the teams.

South Africa and Wales concluded their 2022 Commonwealth Games programmes today as they battled each other for 7th place in Birmingham. The two teams are recent foes having played in a three match series in the build up to the tournament that ended in a 1-1 draw with the total goals scored matching that.

The opening quarter saw Wales have the best opportunity but South Africa had more possession and were disappointed not to capitalise on their penalty corner with a mis-trap. With Jean-Leigh du Toit on the park the South Africans have a lethal weapon at the Penalty corner time and they desperately want to give her opportunities to add to her 6 for the tournament so far.

South Africa were upping the ante in the second quarter with Kristen Paton regularly a driving force in the South African attack. Two penalty corners were awarded to the South Africans. Du Toit picked the drag flick approach for the first which was well saved, while the low drive on the right for the second was narrowly wide.

South Africa were probably the better of the two teams as the game headed towards half time, but both teams were lacking the finishing touch. For South Africa it felt like if it was gonna happen Paton would be the one to make it happen as she fired a shot narrowly wide. But they still needed to remain aware at the back as Mbande was quickly called on to make two important saves.

At half time there was nothing to separate the two teams, in the stats and on the scoreboard.

A moment of quality came as Wales received a green card, That Zulu drove into the circle and picked out a superb ball to find Lilian du Plessis on the back post who made a tough move look easy with the finish. It was a great move down the left for the South Africans that would have delighted Giles Bonnet.

That moment of quality was the moment that separated the two sides at the end of the third quarter as just 15 minutes remained in both teams tournaments.

South Africa received a green card with 10 minutes remaining in the game and Wales would probably have seen this as their opportunity to pull the game back, but they were frustrated by their inability to create any chance of significant quality as the South Africans returned to 11.

South Africa were very close to a second. Kristen Paton created the space passed onto Lilian du Plessis who hit a tantalising ball into the circle which was inches away from the stick of a diving Tarryn Lombard. Just six minutes remained in the game.

Wales pulled their keeper for the final four minutes as they looked for the opportunity to take the game to a shootout. They looked for opportunities to create a goalscoring moment but the South Africans were holding resolute and denying them any moments of danger.

Wales won a penalty corner with 1 second left on the clock. South Africa immediately referred and it was overturned. South Africa had won the game and with it had sealed a 7th placed finish at the Games.