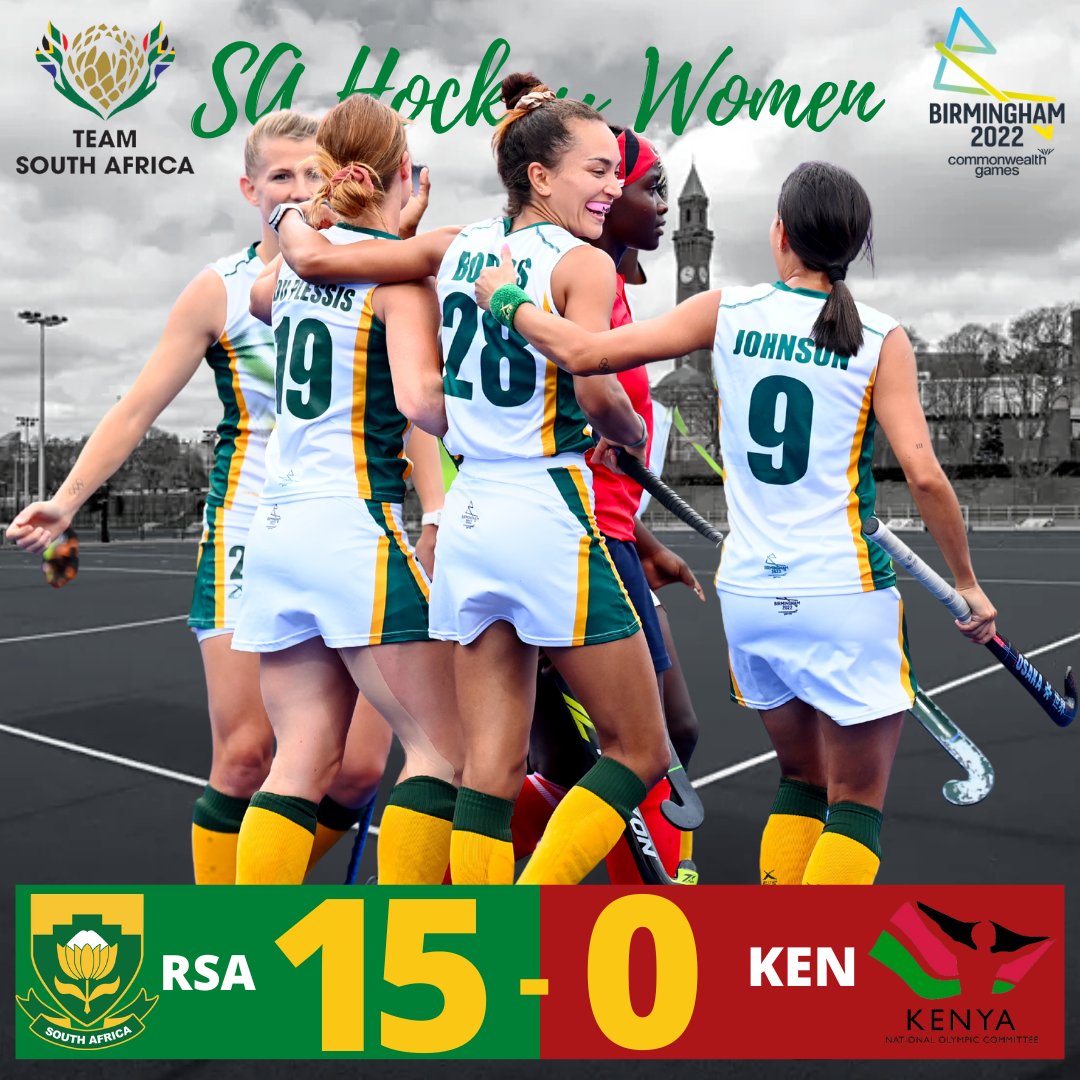 South Africa underlined their dominance on the African continent with a dismissive victory over their East African neighbours in Birmingham today. Hat-tricks from Jean-Leigh du Toit, Tarryn Lombard and Lilian du Plessis were enough to give the South Africans a comfortable win that mathematically keeps them in with a medal hope.

South Africa and Kenya saw the first All African affair of the 2022 Commonwealth Games take place in Birmingham. Both teams were looking for their first victories of the tournament so there was added spice to an encounter that last took place in Ghana earlier this year at the African Cup of Nations.

South Africa made their intentions clear very early with the intent of a team looking to win convincingly. They had the first goal in the 7th minute through the exciting youngster Jean-Leigh du Toit who smashed home a penalty corner.  She looked to double the lead at the next penalty corner but it was superbly charged down by the first wave of the Kenyans. But the African champions wouldn’t have to wait long for another chance to strike as Lilian du Plessis won a penalty corner.

This time South Africa beat the keeper but a superb defensive clearance on line initially denied the South Africans, however the ball was bundled home by Tarryn Lombard and doubled the South African advantage. Two quickly became three as Quanita Bobbs fed the ball through and top goalscorer at numerous African Cups Lilian du Plessis made no mistake of making it 3-0.

Bobbs was enjoying her space in the middle of the park and provided another for former captain Erin Christie. Her diagonal tomahawk ball found the midfielder running into the circle and she finished with the composure of a seasoned striker and at the end of the quarter it was 4-0 to the South Africans.

Nepo Serage was called on to make a save early in the second quarter but when the Kenyans managed to get passed her, Hannah Pearce was on hand to clear the ball. Bernie Coston received a yellow card for a foul in the build up but South Africa were well in control of the game. South Africa won a penalty corner in the time that Coston was off the park, but du Plessis drag was saved before Quanita Bobbs hit the rebound over the top of the goal.

Kenya would have been the more satisfied team after the opening ten minutes of the second quarter as they had limited the South African goalscoring opportunities to a minimum and had a slightly better territorial game than in the opening 15 minutes. Despite the improved performance from the East Africans, South Africa did add to the scoreline with 3 minutes remaining in the quarter. A carbon copy of the opening goal saw Jean-Leigh du Toit double her tally for the game and give South Africa a 5 goal advantage.

There was a debate over who scored the South African 6th goal. Erin Christie had the shot and it appeared to snick the stick of Tarryn Lombard as it nestled into the back of the net. The goal was credited to Lombard, which left no debate about who was the winner of the first half of the game.

Kenya played with tremendous effort but it always felt like a case of when rather than if the South Africans would add to the scoreline. They did it through another Quanita Bobbs assist as she found Kristen Paton and the Klein Switzerland new signing finished off superbly.

Lilian du Plessis made it 8 with a goal of individual quality. She surged through the middle of the park, got a great touch and poked it past the onrushing keeper. It was a goal of true quality from the experienced striker. Okore in goals for Kenya was playing superbly to thwart South African advances. But she couldn’t do anything to stop Jean-Leigh du Toit from scoring her third and completing her first international hat-trick for South Africa.

The same player popped up again to add her 4th and South Africa’s tenth on the night as another brutal strike from a penalty corner smashed into the backboard. The South Africans would have the chance to add an 11th when they reviewed to be awarded a penalty stroke. Lilian du Plessis stood up and made no mistake.

She made it 12 and four shortly afterwards when an unselfish layoff from Bernadette Coston saw Du Plessis have the easy task of putting into the back of an empty goal. Tarryn Lombard was on hand to put home the 13th goal for South Africa and become the third hat-trick scorer of the game. And Du Toit made it five for herself and 14 for South Africa from a penalty corner after that. South Africa would make it 15 through Bernie Coston right at the end of the game to seal the South Africans second biggest victory in Commonwealth Games history (16-0 vs. Trinidad and Tobago in 2014).

The victory gives South Africa a mathematical chance of qualifying for the medal rounds if they can win big against New Zealand on Thursday.