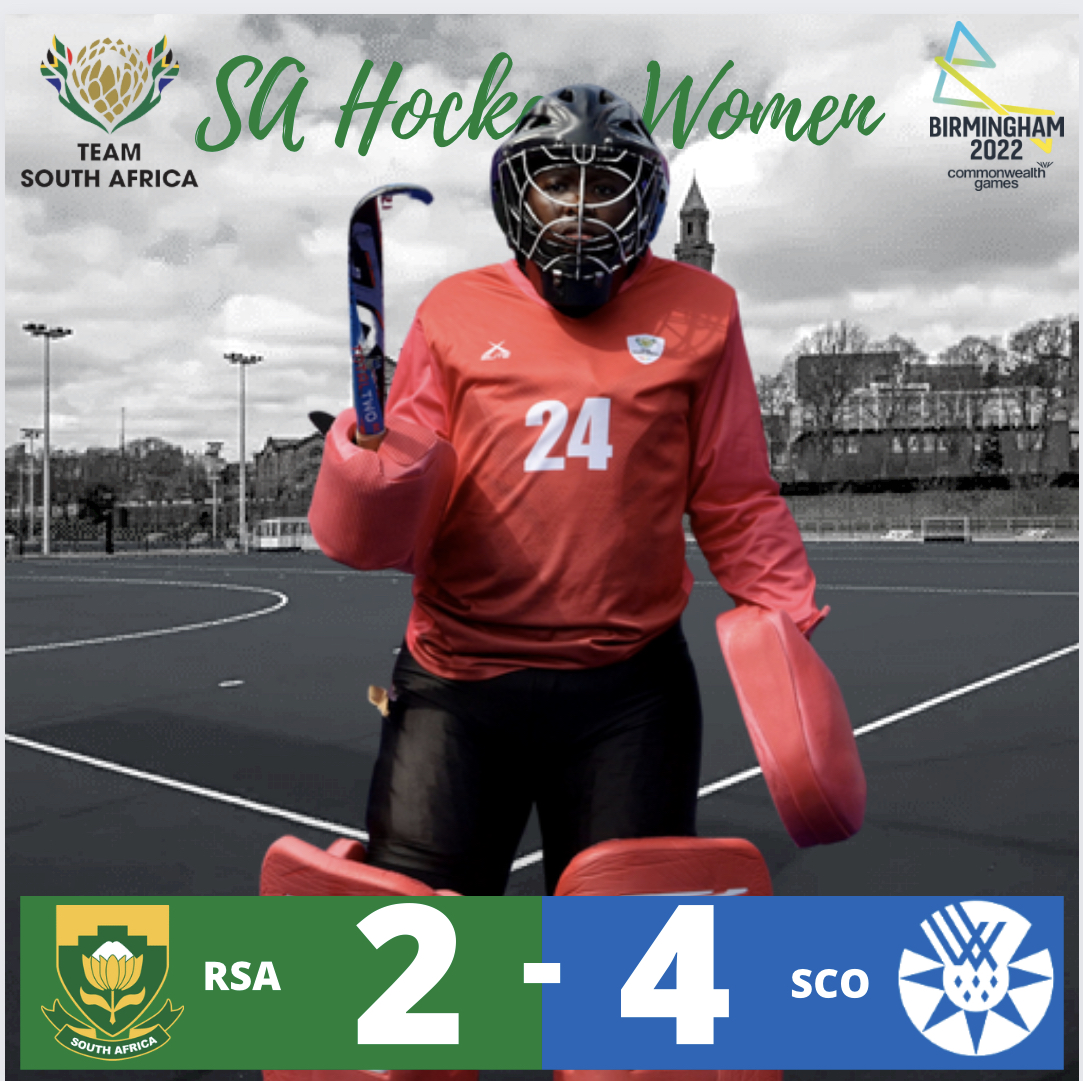 South Africa’s Commonwealth Games campaign has ended in defeat as Scotland pulled back from a goal down to earn an opening day victory against the African champions.

South Africa and Scotland got their 2022 Commonwealth Games underway this afternoon in Birmingham as they met in the group stage opener. There was an added element of intrigue as Heather McEwan, a former South African International Indoor player, lined up for the European nation.

South Africa were looking for a positive start after the disappointing FIH Hockey World Cup but had their backs against the wall early on when they conceded from a second penalty corner. Phumelela Mbande had saved the first one with her helmet, but on the second award Charlotte Watson finished a similar routine.

This spurred the South Africans forward and the African Champions surged forward, won a penalty corner, and levelled. Jean Leigh du Toit fired in the shot and Lisa Deetlefs reacted quickest to restore parity. With four minutes remaining in the opening quarter South Africa used a referral and were awarded another penalty corner. Unfortunately, the shot from Quanita Bobbs was charged down. A few seconds later South Africa had another chance as Tarryn Lombard put Onthathile Zulu through. The exciting striker was losing her footing as she struck, and the shot was saved easily.

The South Africans were starting to dominate the possession stakes and Marizen Marais produced a solid run to win another penalty corner for the South Africans. It was a pivotal moment as it led to the second goal of the game for Lisa Deetlefs. A deflection from Deeltefs from the Lilian du Plessis drag made it 2-1. It would be the score at the end of the first quarter.

South Africa made the first mark in the second quarter when they won another penalty corner, but the chance went astray. It was a frustrating moment for the South Africans as Scotland levelled. A run into the circle was not picked up and Sarah Robertson finished easily.

Scotland was awarded a late penalty corner just before the half time break, South Africa immediately reviewed the decision, but the camera angles were inconclusive and the penalty corner remained. The Africans read the variation and surged up the other end through Tarryn Lombard who set up Du Plessis, the Scots though pulled off a great save to maintain parity at the half time break.

South Africa found themselves trailing again early in the second half. A good save from a penalty corner by Mbande but the rebound was superbly driven in by Robertson and a diving deflection from Fiona Burnet saw Scotland regain the lead. A minute later Scotland had another penalty corner as the ball hit Hannah Pearce on the foot. South Africa though answered the penalty corner question superbly through a great save by Mbande.

South Africa had a big chance but Bianca Wood was denied as they sought for a leveller. South Africa continued to surge forward looking for a goal but they were being frustrated by a resolute Scottish defence. And with 15 minutes remaining it remained 3-2 to the European Nation.

Quanita Bobbs produced a wonderful run at the defence at the start of the final quarter but her shot was saved and another chance had gone without reward for the South Africans. Scotland received a yellow card for dangerous play. South Africa won another penalty corner but the Shot from Bobbs fired inches wide.

South Africa produced another golden opportunity when Kristen Paton picked out the perfect pass which Bernie Coston dived onto and it was again superbly saved by Gibson. Mbande was then called on to make a quality save of her own as Scotland fought back. They won a penalty corner from the danger and managed to pull a further goal ahead through Louis Campbell. It was a sucker punch for the South Africans who were enjoying their best period of the game.

The African ladies continued to search for a goal but were thwarted again and again and ultimately their Commonwealth Games opener ended in defeat.