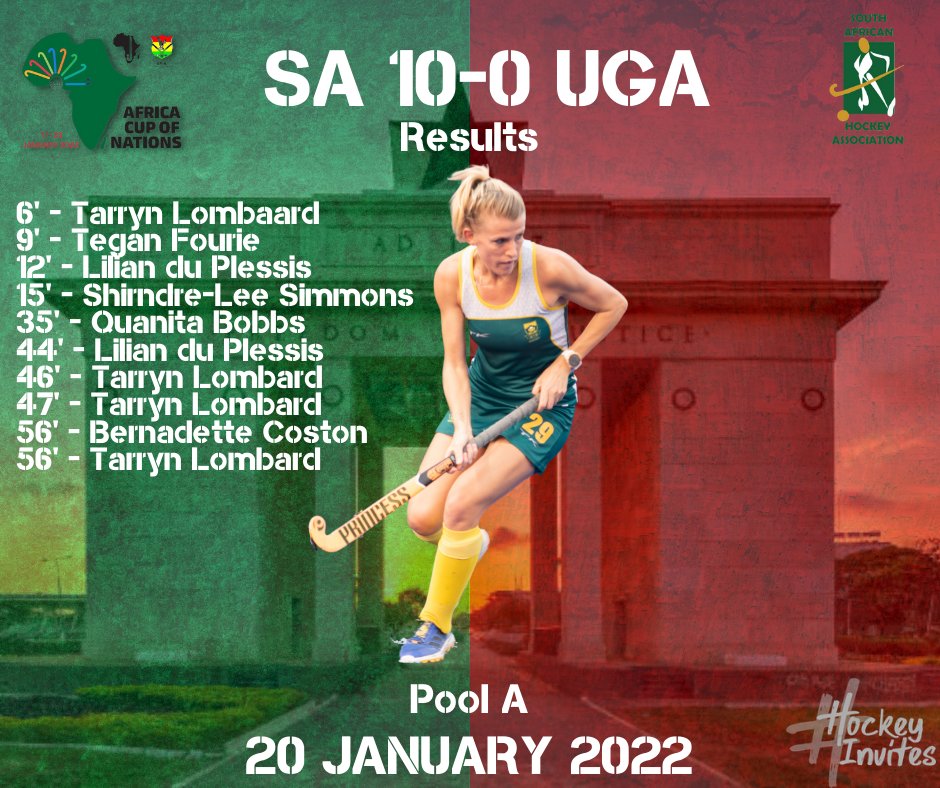 The South African women’s hockey team had already qualified for the semi-finals having scored 9 unanswered goals in the tournament, but they were looking to step up their cutting edge in front of goal in todays final Pool A match against Uganda. They were also looking to celebrate Tarryn Lombard’s 50th game in style.

They produced a clinical opening quarter of the game with some beautiful symmetry to the timing of their goals. They scored 4 goals, each split by three minutes to lead the opening quarter 4-0. Tarryn Lombard opened the scoring in the 6th minute to start her 50th test on a high and she was joined on the scoresheet by Tegan Fourie, Shirndre-Lee Simmons (With her first international goal) and Lilian du Plessis.

Despite their ongoing domination the South Africans were disappointed that they failed to add to the scoresheet in the second quarter, although Uganda will be proud of the defensive effort, they put in to keep the score at 4-0 at the half time break

They could do nothing to stop the South Africans though as Quanita Bobbs made it 5-0 before Lilian du Plessis scored her 38th career goal at African Continental Tournaments. The apt cherry on the cake though came in the final quarter when Tarryn Lombard added her 2nd, 3rd and 4th goals in an incredibly memorable game for her. Bernadette Coston got her own goal as well to take South Africa into double figures, the first to do so at this tournament.

“We played very well today and nice to score some goals. Uganda plays with tremendous spirit and it’s a really great addition to the tournament to have them here. From here we focus on the semi-final tomorrow!”

The South Africans next take on Kenya in the Semi-Final tomorrow 17;45 South African time, while the second semi-final will see Ghana take on Zimbabwe straight afterwards.