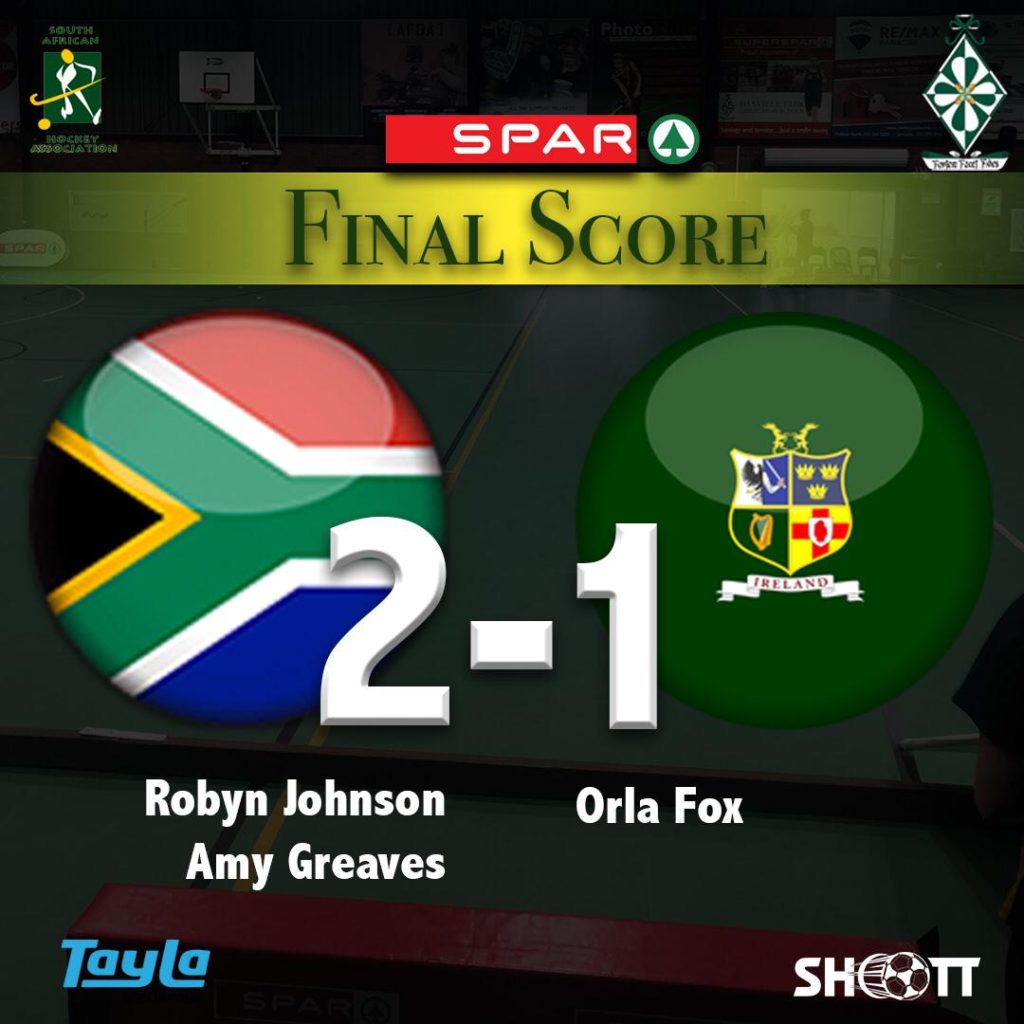 At the end of the SPAR Indoor Test Series between South Africa and Ireland, the hosts will have played 29 indoor hockey test matches in the year, incredibly this test match was the first in 29 years for the visitors. Incredibly that meant that all but three of ladies would not have been alive when that team competed. As a result, all 12 players that featured in the opening test match made their international debuts.

So, with a wealth of international indoor inexperience but tons of good old Irish gumption, the Irish arrived to play a team amid a sensational program of indoor hockey. That programme has seen the SPAR South African ladies go undefeated for 14 consecutive tests including matches against Switzerland and Czech Republic. It was all set up for a historic first test between the two hockey loving nations.

The South Africans started like the team more used to indoor hockey and quickly dominated the early proceedings with some quick interchanges that underlined their attacking approach to the game. Unfortunately for all their domination the hosts were unable to delight the audience with a goal in the opening ten minutes but limited the visitors to a few counter attacks that the likes of Jess O’Connor and Kara Botes dealt with effectively.

Although the Irish got a little bit more ball in the second quarter with Orla Fox looking particularly impressive, the South Africans continued to dictate the pace of the game with Jamie Southgate proving to be a menace for the Irish. As the game was petering towards a deadlocked half time score, despite the best efforts of Cindy Hack and Edith Molikoe, it was Robyn Johnson who popped up to put the hosts 1-0 up. Kara Botes won the ball on defence in her own D, switched it to Amy Greaves who played an inch perfect long ball to Cindy Hack who squared for Johnson after a lung bursting run from the goal scorer to gain the lead.

Ireland had an early chance in the second half for Kate McKenna but Cheree Greyvenstein blocked the shot before the South Africans doubled their lead within 60 seconds. Amy Greaves and Cindy Hack combined in the middle of the park before a sublime ball from the skipper sent Greaves one on one with Millie Regan and she made no mistake in her 66th test match.

Ireland, to their credit, held firm though and although their chances were limited, they were never out of the contest through some impressive defensive work with the likes of Niamh Small and Sophie Barnwell impressing. Barnwell won the Irish a penalty corner in the 35th minute of the game and they Orla Fox finished superbly to score the first Irish indoor goal in 29 years.

Although Ireland sensed the opportunity for an upset, the South Africans management of the final five minutes of the game will be particularly pleasing to Lennie Botha and his coaching team. The team held possession, controlled the pace and limited the Irish to a few desperate breaks while creating a few opportunities themselves to kill off the game. At the end, as the Irish would say, it was great craic and sets up the remainder of the series outstandingly well.