Like all great movie trilogies, the Indoor Test Series between South Africa and Switzerland men and women, headed into its fourth part in Cape Town. The venue in Western Cape was Sunningdale, a bigger and faster court than the teams had experienced in Durban offering a brilliant and tantalising prospect for the remaining three tests.

The teams had got to know each other in Durban so instead of that awkward first date vibe where you are kind of interviewing one another, this was time for the in-depth conversation about hopes and dreams and your ten-year plan. Okay maybe not quite with the BlitzStoks featuring debutants Mustapha Cassiem, Melrick Maddocks, Kyle Esau, Dayaan Cassiem, Aiden Tun and Marvin Simons. There was also involvement for Jarryd Jones, arguably one of the finest talents in the country.

It was a debut for Mustapha Cassiem to remember as his hat-trick and ultimately seal a remarkable test match for the hosts. In fact, all six of South Africa’s goals in the pulsating 6-5 win were scored by debutants, further reinforcing the wonderful work done by the selection committee for South Africa. 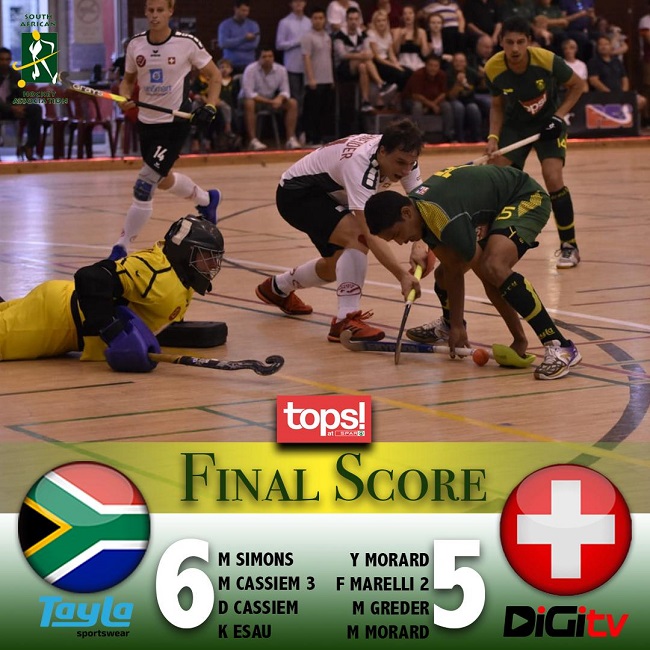 What the thrilling performance of David Joshua’s men has told us further is that the pool of talent for South African indoor hockey is fuller than you after you visit one of those all you can eat buffet spots.

For the South African men, after a long absence from the International stage, have made some great history. The Cassiem brothers becoming the first brothers to score in the same indoor hockey test match for SA, the team winning a first ever test series against European opposition and of course David Joshua remaining undefeated as the Men’s head coach.

For SPAR South Africa they received their sternest test of the series. But just like a dux scholar, even the hardest test could not stop this juggernaut from rolling on. Although Lennie will be unhappy that they conceded three goals, he will be pleased that his team was always in control.

Amy Greaves, Celia Evans and Kara Botes had given the hosts a 3-1 lead after trailing early to a Trosch goal. Stomps made it 3-2 to give the Swiss hope but then a brilliant turnover by Jamie Southgate and an unselfish cross for Cindy Hack led to the skipper netting what would ultimately be the winner.

It remarkably means that the South Africans, ranked 16th in the World, have now beaten Switzerland in 7 of their 9 test matches this year. Such is the domination that the hosts do not enter these competitions as underdogs, but as equals and as value for competition. 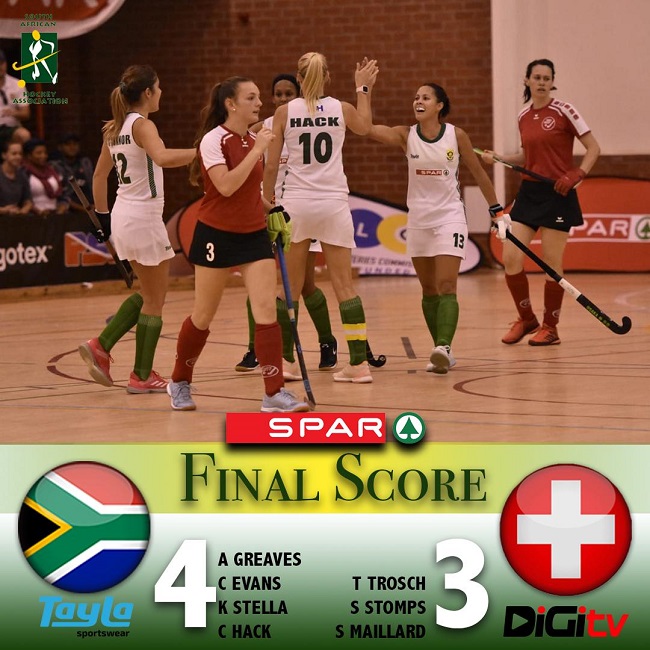 The second last test of the series takes place on Friday with the final on Saturday. You can stream the matches on Digitv.