Historic Night for BlitzStoks while SPAR SA continue to Shine

The second night of the indoor test series between both the South African and Swiss Men and Women proved to be a night that belonged to the lower ranked South African sides. The BlitzStoks produced a moment of historical significance while SPAR South Africa showed their continued superiority over a team ranked 9 places above them in the Official Indoor Hockey World Ratings.

For the BlitzStoks, powered by Tops at SPAR for this series, it was a night to remember and it became a night for the history books as the BlitzStoks beat their European counterparts 4-3. The victory was the first time a South African Men’s Indoor Hockey team has ever defeated European opposition as well as the first time they have tasted from the sweet cup of victory against a side ranked in the top 8 in the World.

Having faced a few early short corners, the South Africans were able to repel the Swiss attack on an extremely slick surface and then found themselves ahead when Chad Futcher fired a rocket to make it 2 international goals in 2 games for South Africa. They didn’t have to wait long for the second when the BlitzStoks surged forward after a slip from the Swiss and Chad Futcher crossed for Ignatius Malgraff to get his first International Indoor goal, after scoring a fair amount of outdoor goals for the country already.

Having established a two-goal lead, coach David Joshua, will be disappointed with how quickly they invited pressure in defence and were thankful to their upright as it twice denied Michel and Morard respectively. The post could not stop Pascal Knabenhans as he pulled a goal back with a superb penalty corner flick. But the BlitzStoks re-established the two-goal cushion with a fantastic piece of work from Lungani Gabela, his first International goal, after fantastic work from Hezlett and Eustice. 3-1 the half time score in favour of the hosts.

Switzerland showed why they are ranked in the worlds top 10 though with a fight back in the third quarter. Knabenhans made it 3-2 with another fantastic penalty corner, almost a carbon copy of his first before Morard scored a superb goal after patient build up by the Swiss. The finish was perfection and the Swiss had levelled the game. This game was going to need something special to win it and that’s exactly what it got.

Keegan Hezlett almost produced it but ultimately it was Keagan Robinson that did. 870 days after he scored his last indoor international goal, Robinson reminded everyone of his remarkable recovery from knee injury with the type of finish that epitomises his play. His brother Jonty fed Gabela who deflected through to Robinson before a diving finish secured the historic win for the South Africans. 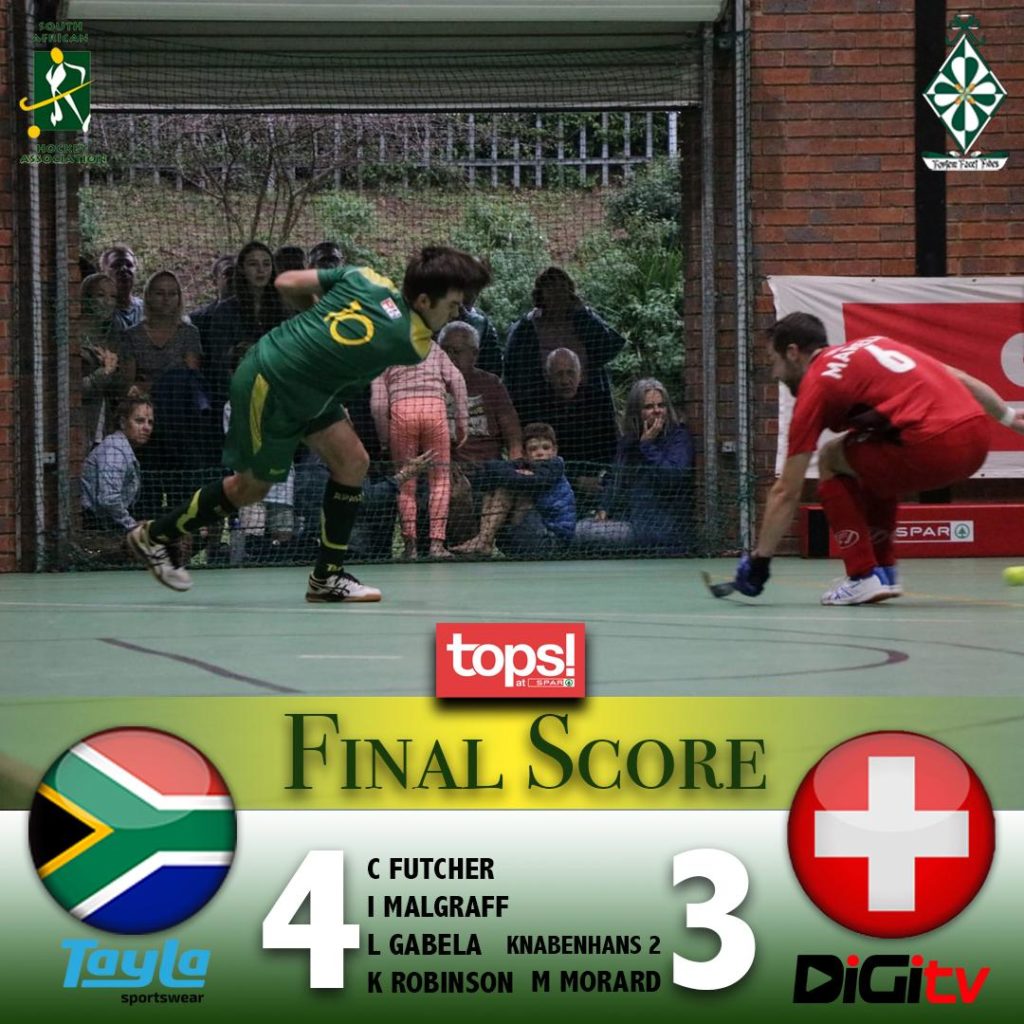 The SPAR South Africa Indoor ladies’ side have built their incredible run of just 3 defeats in their last 37 games on impressive defensive performances. In that time, they had conceded just 46 goals at an average of 1.24 a game, frankly ridiculous. But their victories may be built on steadfast attack, but the ability to attack with superb skill and the regular ability to land a quickfire double punch.

They did that tonight when they opened the scoring from Kara Botes with a superb penalty corner variation. Kara is lethal at the top of the D but letting her pick it up 5m from goal is never going to end well for a defending team. Before Switzerland had a chance to catch their breath it was a Lennie Botha special that saw Kayla de Waal finish expertly to make it 2 in 2 for the 19-year-old and a 2-0 lead for the hosts.

2-0 though once again proved to be a dangerous score and Switzerland pulled a goal back when Nora Murer converted a penalty stroke past Zimi Shange.

Rather than be nervous, this SPAR South African team is built of sterner stuff and that description is apt for the goal scorer of the third. Eloise Walters has only recently recovered from her own knee injury and her goal would have made the KZN Inland province extremely proud, heck it made us all proud. There was still time for one more for South Africa to secure the victory beyond a shadow of a doubt with Robyn Johnson popping up to net her first of the series.

The hosts now head into the third test of the series with a 2-0 lead and are one win away from ensuring they can’t lose the series. Of course, we know that Lennie Botha and his team have grander plans than that.

The third test matches take place on Tuesday and all games are streamed by Digitv. 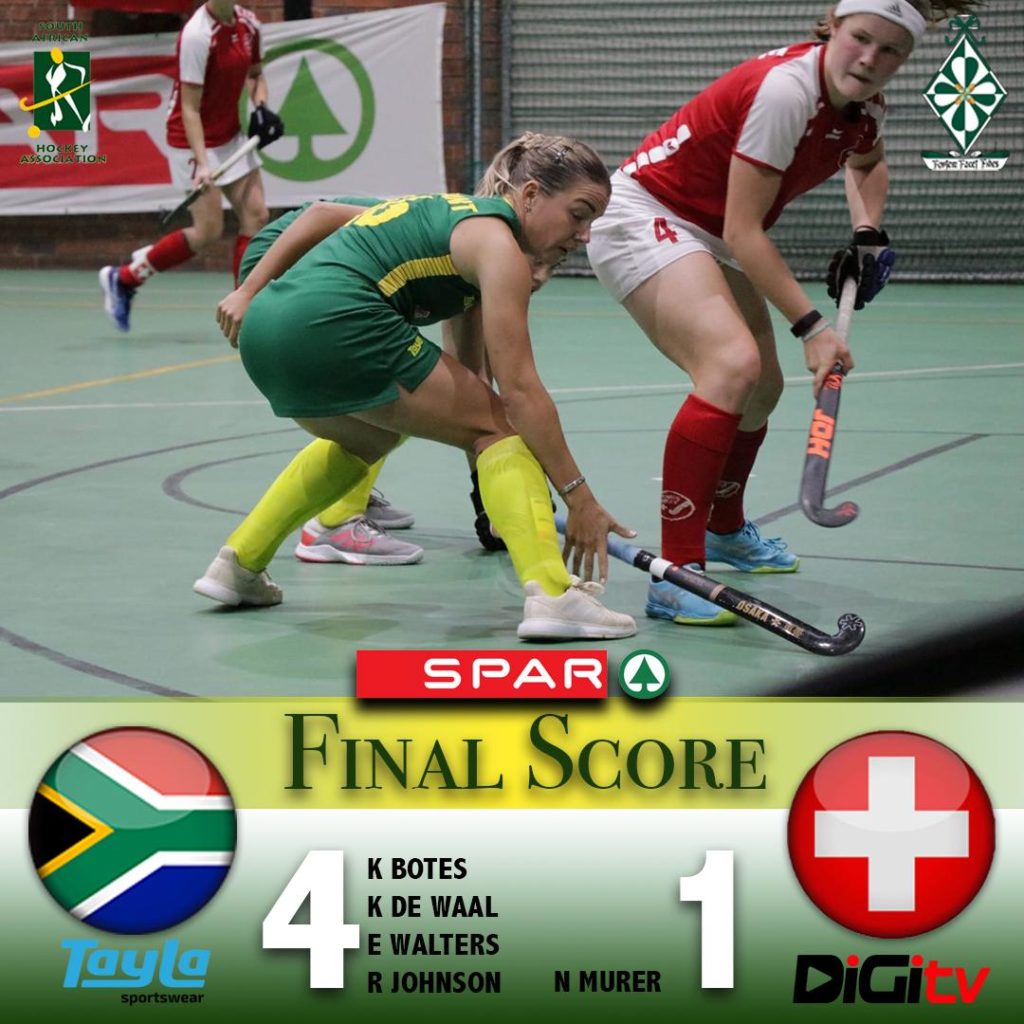