South Africa bounce back with superb victory over Chile 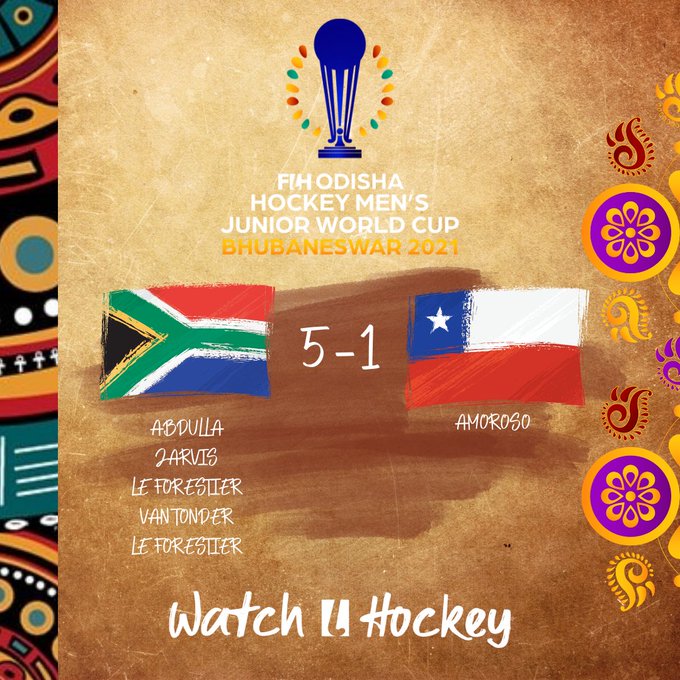 The South African U21 Hockey Men reignited their Quarter Final hopes with a brilliant clinical display of attacking hockey against Chile this morning. After a tough opening encounter with Belgium, the Africans knew it would be a tough encounter taking on the 2021 Pan American Championship winners Chile.

The South Africans were clearly the dominant team in the early exchanges and were able to make that dominance count with a wonderful team goal finished by Idrees Abdulla in the 7th minute. Despite continued dominance South Africa were unable to add to the scoreline in the first half and were hoping they would not rue the lack of cut-throat in the opening 30.

Chile started the second half with a much greater determination following some stern words from head coach Alejandro Gomez, but the foot hold they were creating in the game slipped as South African vice captain showed alert thinking to react quickest in the D and finish with a sublime strikers touch.

The Chilean’s fought back immediately and pulled a goal back and reinvigorated their challenge with an Amoroso drag flick from a penalty corner that was speeding up as it flew in past Guy Morgan on the post. The Chilean Sail was gathering wind, but Cameron le Forestier popped up to tear the sail with a brilliantly orchestrated diving finish. It was a the type of goal that you spend hours training for in the hope that an opportunity like it presents itself in a game.

The South Africans know that goal difference could play a part in the discussion so they kept going forward looking for another and from a penalty corner, specialist Jacques van Tonder netted his second of the tournament to make it 4-1.

4-1 became 5-1 in the final chukka as le Forestier popped up to claim his second and give the South Africans an even goal difference ahead of their final group game against Malaysia.

OF course, after the result today, the boys will watch the Malaysia and Belgium game later and this will leave them knowing exactly what they need in the final group game tomorrow!