SA U21 Men squad trimmed to 24 for African Cup 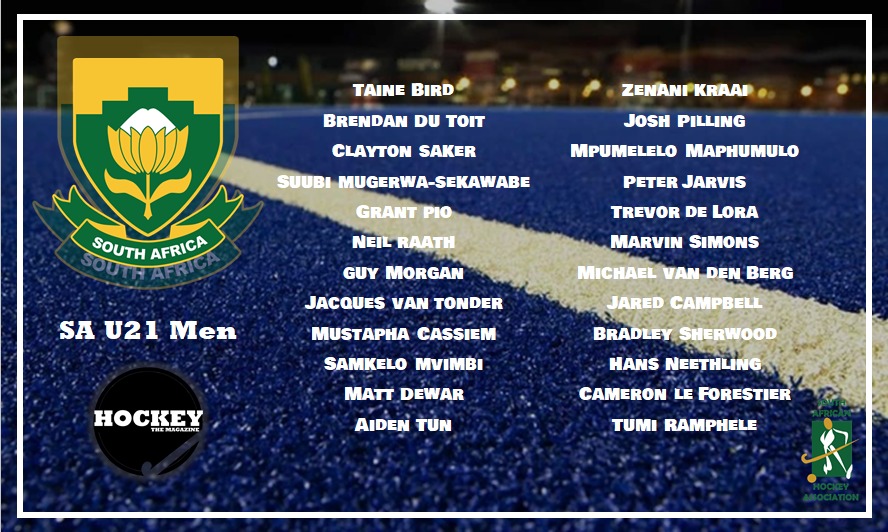 The South African Hockey Association has today announced the 24-man South African U21 Men’s squad. It is from this 24 that the final 18 will be selected to contest at the African Junior World Cup Qualifiers in Ghana in March. The squad initially assembled was 45 players.

With the global pandemic wreaking havoc and sports events, the U21 side have not been able to avoid it. With no U21 IPT this year and no opportunity to play in the Premier Hockey League or in the now cancelled series against India, the management team have been forced to change approaches. This has come in the form of secure environment training and selection camps.

The squad recently completed one such camp at the University of Pretoria and was the basis on which the current selection has been made. The 24-man squad has a few players already having experienced International Senior Hockey. Samkelo Mvimibi has featured for Garreth Ewing’s outdoor side, while Aiden Tun and Marvin Simons have both featured for David Joshua’s national indoor hockey men. Mustapha Cassiem has featured in both sides and his ability to produce magic out of nowhere will be a major draw card for the team.

The team is also filled with a litany of players that have been in the system for a while now including the likes of Brad Sherwood, Peter Jarvis, Tumi Ramphele and Clayton Saker. While Guy Morgan will be an integral asset for the penalty corners.

Coach Sihle Ntuli was glowing in his praise of the team and their commitment through the trying times:

“I am very excited with the squad as it stands. We have a superb balance in the squad, and it is a great batch of players. The boys have been very committed through the difficult period and the lack of hockey. They have worked incredibly hard and the discipline they have shown is far beyond their years. I think it bodes incredibly well for us as a country.”