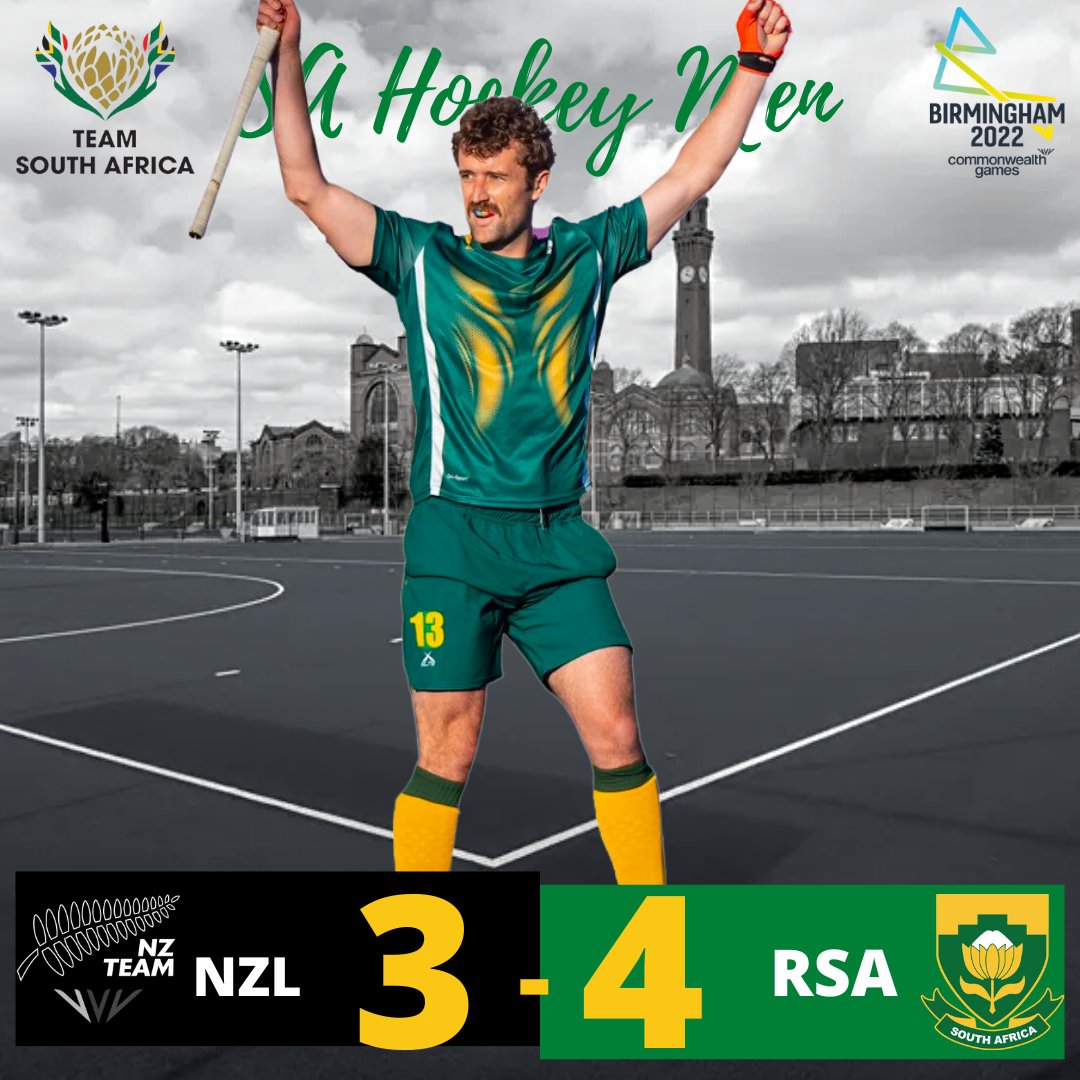 The SA Hockey Men showed class and heart in defeating New Zealand to keep the hope of a medal and a top 4 finish alive. They led 3-1, were pegged back to 3-3 before Connor Beauchamp punished the opponents with a brilliant and brutal penalty corner.

South Africa and New Zealand locked horns in a virtual quarter final. A draw would be enough for the Black Sticks while South Africa had to get the victory to progress to the medal rounds. They were up against a good New Zealand side who were coached by all time top South African goal scorer Greg “Beefy” Nicol.

South Africa won the first major battle of the game. Superb quick thinking from Bili Ntuli won a penalty corner for the African Champions who were looking to start the game on the front foot. And they got exactly that as Matt Guise-Brown fired the ball wonderfully into the backboard.

New Zealand were creating a couple of half chances but had not tested Gowan Jones in the South African goal in the opening exchanges, but they were firing a few warning shots in the South African direction. But it was South Africa though that doubled the lead through vice captain Keenan Horne picked up a rebound from a deflection, and fired it home with ferocious intent.

New Zealand won their first penalty corner of the game and just like South Africa converted with an unstoppable shot past Gowan Jones. The pace and direction of Sam Lane’s flick was textbook in perfection.

The game had a very open feel to it as a South African circle entry was quickly followed by a New Zealand penalty corner as Taine Paton slipped and was adjudged to have taken the stick out of the striker. This one was kept out by a combination of Gowan Jones and Jethro Eustice and the quick counter by South Africa almost found Dayaan Cassiem completely unmarked on the spot.

South Africa once again were causing trouble on the counter attack and the shot was lifted straight back into the South Africans. The whistle immediately was blown for a penalty corner although the South Africans would probably have liked the advantage as Nic Spooner was on hand. The penalty corner from Connor Beauchamp was blistering but over the top. A superb and frenetic first quarter drew to a conclusion as fans around the globe were catching their breaths!

Within the opening minute of the second quarter both teams had created circle entries highlighting how likely the game was to continue in the same pulsating mode as the opening 15 minutes. Bili Ntuli won South Africa another penalty corner with another strong direct run into the circle. Once again Matt Guise-Brown made it count with a low and hard strike to restore the two goal lead.

Another break from South Africa saw Bili Nutli have a shot on the reverse stick which was well saved by Hayward for New Zealand, who were struggling to cope with the speed of the South African counter attack. They were still looking dangerous going forward as Phillips created a shot which was well defended by Dayaan Cassiem.

Tevin Kok was the next to take a quick free hit and a wonderful shot that was headed for the top right hand corner was saved sensationally by Hayward. Dayaan Cassiem created space and had a shot from a tight angle but the space was limited. Tim Drummond had a rare foray forward and turned it into the New Zealand foot and another penalty corner was awarded to the South Africans. Connor Beauchamp in a carbon copy of his first fired it just over the top of the goal.

Bili Ntuli broke through superbly one-on-one and Hayward produced a save that fits safely into the World Class category to deny the South Africans. And at the half time break it was South Africa that had the two goal lead.

Against the run of play New Zealand picked up a loose ball in the circle but Gowan Jones followed the Hayward approach and produced a wonderful save. South Africa immediately surged up the other end and Hayward produced another World Class save, but the South Africans were awarded a penalty corner. Dan Bell fired it low but Hayward made a good save.

The pace of the game never slowed as both teams continued to seek out opportunities and a mistake form Le-Neal Jackson allowed New Zealand to pull goal back. It was an unforced error that frustrated the South Africans immensely.

South Africa scored a fourth superbly form a penalty corner through Guise-Brown but the video umpire ruled the ball had not left the circle. It was another dubious decision as both teams looked for the games next goal, which would have to wait until the final quarter.

New Zealand had the first opportunity to land the next goal as they were awarded a penalty corner early in the quarter. They would equalise from the penalty corner which was converted by a diving deflection and it put New Zealand into the driving seat of the semi final.

South Africa somehow missed as Ryan Julius slid onto a fine ball from Tevin Kok and it missed by inches. South Africa won another penalty corner through more superb work from Bili Ntuli with 7 minutes remaining. Connor Beauchamp scored through the legs of Hayward but once again they referred. This time the goal stood!

New Zealand pulled Hayward off and Gowan Jones immediately had to make a good save as New Zealand put massive pressure on. 5 minutes remained. With 3:30 remaining New Zealand won a penalty corner with a paddle onto Guise-Brown’s leg. A mistrap from the Black Sticks gave South Africa a free get out of jail card and then South Africa should have scored but Cassiem fired narrowly wide.

Gowan Jones made another important save with 2 minutes remaining on the clock. And South Africa absorbed a ton of pressure. 1 minute remained. And despite a video referral South Africa hung on to all bit confirm a place in the semi-finals (Unless Pakistan beat Australia by 3).