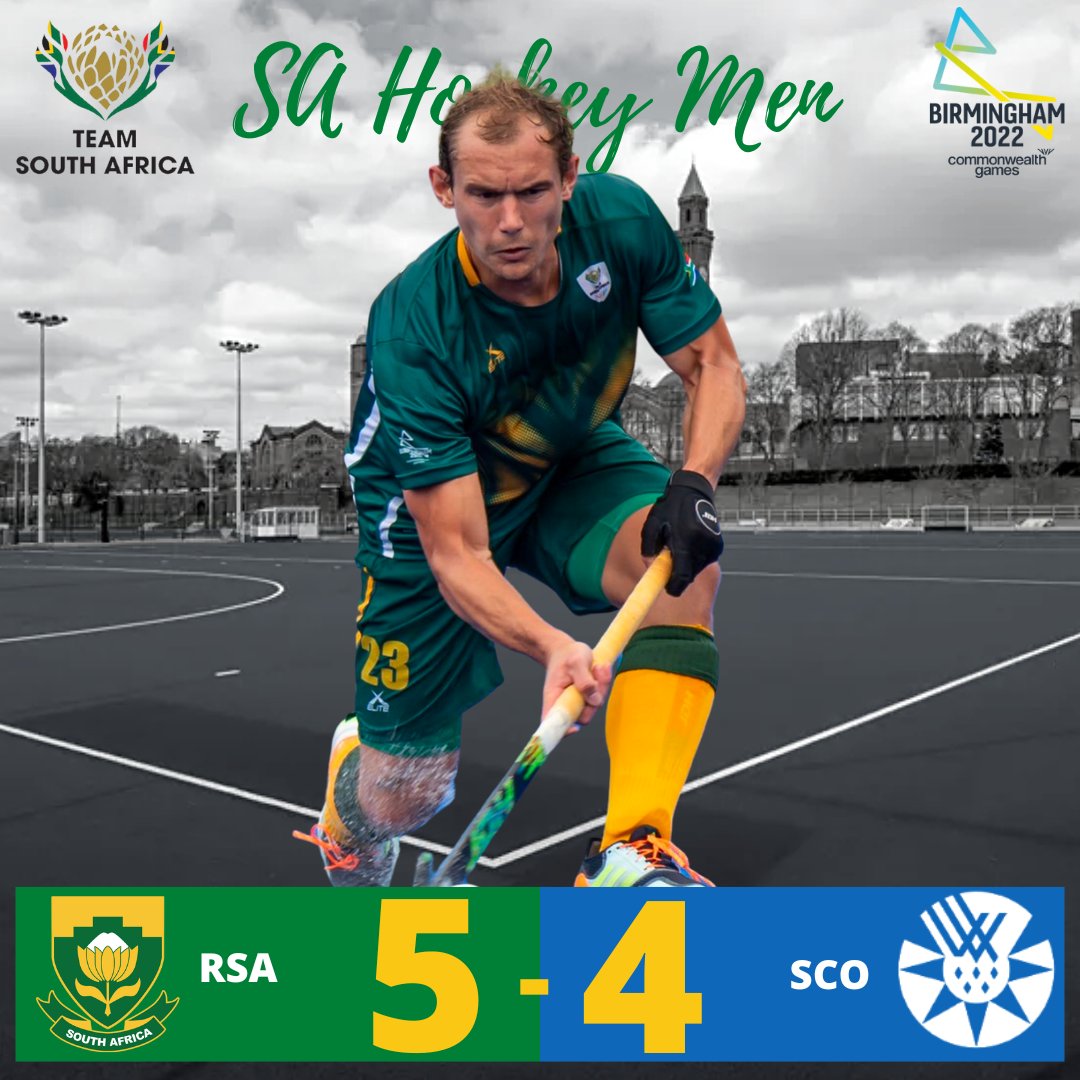 Two goals in the final four minutes saw South Africa snatch a dramatic victory from the jaws of defeat in Birmingham, to keep their Semi-Final and medal hopes alive!

Scotland had already played two games so far in the Birmingham tournament with a tremendous draw against New Zealand and a big defeat to Australia while South Africa were looking to build on their opening game draw against Pakistan. Both sides knew that anything other than victory would be detrimental in their quest for progress to the medal games.

South Africa got the perfect start to the game with Dayaan Cassiem picking up the ball on the right hand side of the circle and powering home a scoop finish into the top left corner. It was exactly the type of start that Garreth Ewing and his men would have wanted.

Scotland had a wonderful chance to score after superb work by Forsyth, but the diving finish was shot wide to the disappointment of the Scottish. Both teams had penalty corners successfully overturned to deny penalty corners as the opening quarter concluded with just the one goal between the two teams.

Scotland were the first to ask a question in the second quarter with a shot at goal, but it was lacking the quality required to beat the South Africans. Scotland were upping the ante and were awarded a penalty corner. A great drag flick from Golden beat Gowan Jones but Tim Drummond cleared off the line superbly, a trademark save from the captain.

South Africa brought a true moment of quality in the game to produce the second goal. Nic Spooner ran onto a decisive break and finished superbly. The African champions were delighted with the goal as they rightfully should be.

The game had some ill tempers creeping in and Scotland and South Africa both received cards as the umpires stamped their authority on the game. South Africa created the next goal scoring opportunity with a strike from the side but it was saved and that was it for the first half. South Africa, who are known for the danger from the penalty corner, had delivered two brilliant field goals to hold the lead at the break.

Scotland won a penalty corner early in the second half after some dubious umpiring which also led to a green card for South Africa. The goal was converted by Scotland to breath life into the game. Scotland equalised seconds later as they found their captain in the circle, he got the touch in front of Nolutshungu and fired home into an empty net.

Somehow Scotland found themselves in front when Siya Nolutshungu was unable to save a shot hit fairly innocently on target and the South Africans were rocked. South Africa had a penalty corner which was lifted into Mustapha Cassiem but on referral the call was upheld as not dangerous.

Scotland had the next penalty corner and they struck the crossbar as the South Africans were hanging on. But they took advantage of that to run up the other end and took their first opportunity of the quarter. The Cassiem brothers combined before a well timed and executed deflection from Bili Ntuli levelled the scoring.

South Africa restored parity through an absolute cracker from Matt Guise-Brown with just four minutes remaining. Both teams were desperate for the winner. Bili Ntuli had a shot at goal but the deflection fired wide and the game looked destined for a draw. But Taine Paton popped up with a brilliant shot over Tommy Alexander. It was a massive moment for the African champions and one of their most seasoned players stood up to be counted.