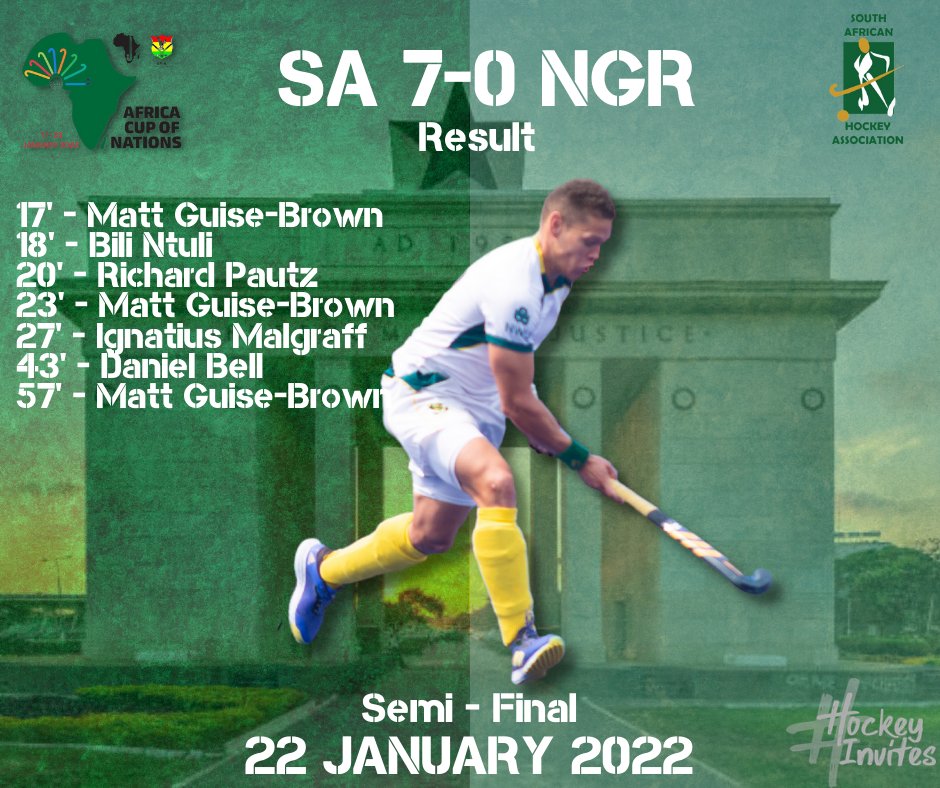 South Africa and Nigeria met in the 2022 African Hockey Cup of Nations at the Theodosia Okoh Hockey Stadium, which last hosted the tournament in 2009. The two sides last faced off in a test match in 2017 when the South Africans emerged victorious by 8-1. South African High Commissioner to Ghana Her Excellency Grace Jeanet Mason was again in attendance at the venue supporting the Southern African side.

First Penalty corner of the game went the way of Nigeria, but they were unable to control the injection. South Africa almost created their own opportunity, but a slight deflection mean Taine Paton could not get on the end of the cross. With both cards receiving some early green cards, it was South Africa who got the next opportunity with a penalty corner but were unable to trap it as it was charged down well.

Nigeria was showing tremendous tenacity in defence and looking for the opportunity to counterattack with John Victor a particular threat in that regard. But despite both teams’ best efforts the opening quarter finished with parity still in place.

The first telling moment of the second quarter came 2 minutes in when South Africa were awarded a penalty corner. The first was charged down and the second was defended but it was third time lucky for South Africa as Matt Guise-Brown broke the resilience of the Nigerian resolve with a powerful flick.

South Africa took the opportunity to rub salt into the brand newly opened wound as the Spooner / Ntuli combination paid dividends again. Nic Spooner received the ball in the D and through a crowd picked out co-vice-captain and club teammate Bili Ntuli who finished with his typical cool as ice approach.

South Africa were putting on an exhibition and Ntuli turned provided as a pin-point cross picked out Richard Pautz whose finish left n doubt. South Africa compounded their dominance when Guise-Brown finished a bullet of a pc to make it 4-0 before the break. Nic Spooner was dictating play and his through ball found Ignatius Malgraff who made it 5-0 before the break.

The second half played out much like you would expect as the South Africans slowed and dictated the pace of the game in the intense Ghanaian heat. The match was however becoming fairly physical with the treat of cards looming, but both teams kept their cool and South Africa added to the scoring once again at penalty corner time with another triple award being converted by Dan Bell for his first of the tournament.

It was a mature performance by the South Africans in the second half as they hardly gave the Nigerians a sniff at goal, and when they did the defensive backline, no matter which combination was on, was wonderful in breaking down any build ups. They also had the opportunity to go and add to the score line with the power of Guise-Brown netting his hat-trick from the penalty corner.

“I think we started a little bit slowly, but we were superb in the second quarter. Our performance was good, and we ticked things off. The final will be tough, this is Africa and whether its Kenya or Egypt it will be a wonderful spectacle for the fans!”

The men will now compete in the final tomorrow evening at 20:00 (South African Time) against the winner of Egypt and Kenya, being contested this evening. The winner of the final will qualify for the FIH Hockey World Cup in 12 months’ time in India.