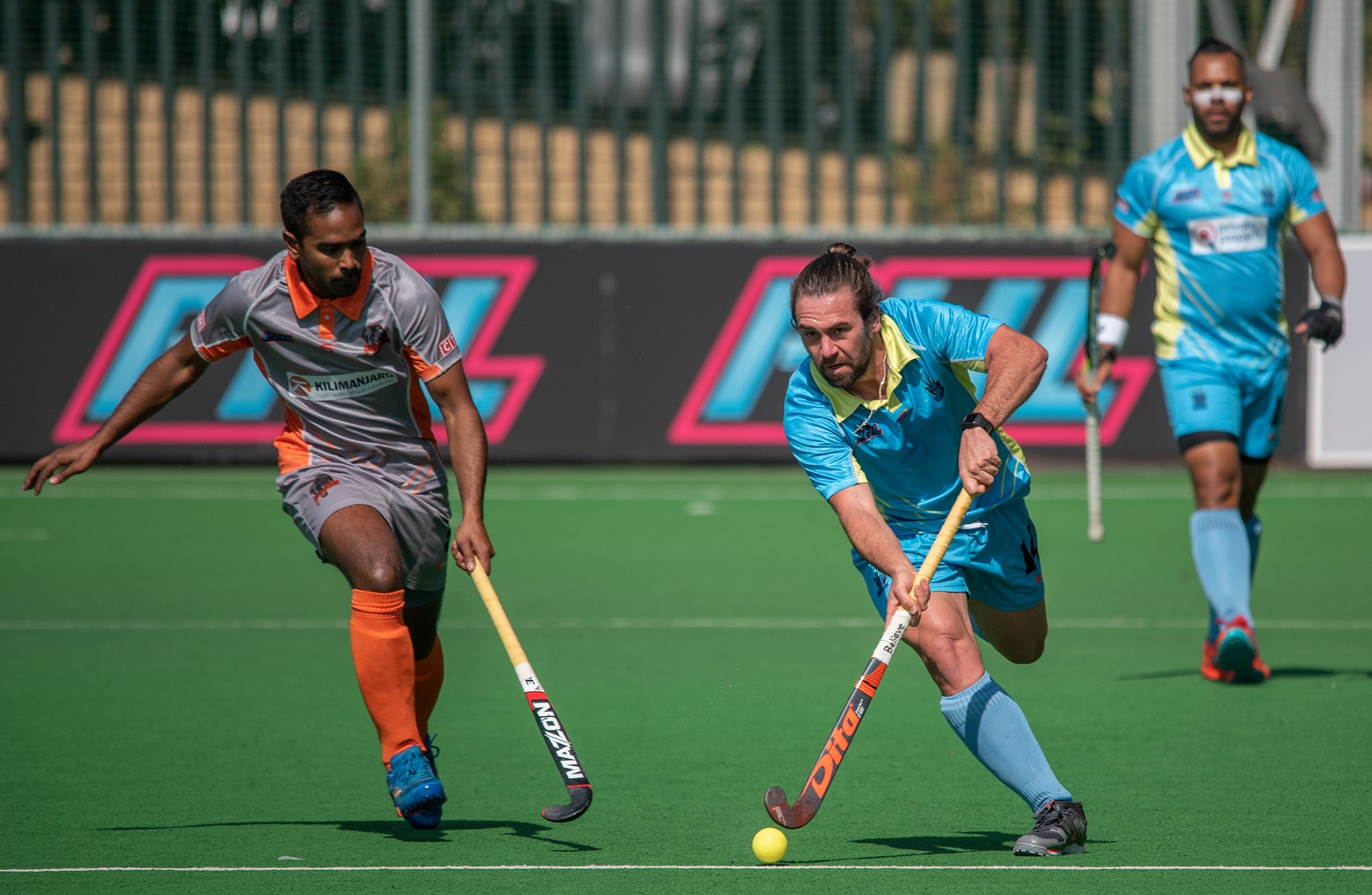 Entering the Men’s final group stages, three of the four semi-final spots had already been decided. The table topping Mapungubwe Mambas were to be joined by the two previous victors the Maropeng Cavemen and the Drakensberg Dragons. The final spot would be decided in a virtual quarter final between the Addo Elephants and the Garden Route Gazelles.

The Garden Route Gazelles come out firing with an early first quarter goal. Gareth Heyns standing on post was unable to deny Connor Beauchamp’s low drag flick and it was 1-0. The Elephants showed their own fighting spirit and brought matters level through skipper Reza Rosenberg. The South African dual indoor and outdoor national finished with a very reactive strike to restore parity.

But Ashlin Freddy’s side re-established the lead when Matthew Martins made a good penalty corner save but Keenan Horne was on hand to slap in the rebound. It was very soon 3-1 as Taine Paton showed superb aerial skills before a blistering strike gave Martins no chance. If Paton’s goal was good, then Reece Arendse’s finish was great. Picking up the ball in the D, Arendse pushed it across to create the space and fired it home.

The Elephants brought themselves back into the game with a penalty corner strike by Gareth Heyns before the superb youngster Marvin Simons rounded Martins and made it 5-2 which would ultimately be the final score and a confirmed place in the semi-final for the Garden Route Gazelles, while the Elephants would miss the final four for the first time in PHL history.

The others men’s game today was to decide the top team in the group stages and the Mapungubwe Mambas continued their fine form to run home with a 4-1 win over the Drakensberg Dragons. Neil Raath opened the scoring with a low drive into the bottom corner and Dylan Swanepoel levelled with a great drag flick for the Dragons.

With 8 minutes left the Mambas broke the deadlock with some quick passing and quick thinking for Mustapha Cassiem to make it 2-1. They quickly made it 3-1 when a Ryan Julius was saved but Ross Goncalves reacted quickly to fire home. There was still time for a bonus point as the Mambas finished the group stages with a perfect record. Calab Syce finished from an Owen Mvimbi cross into an empty net. 4-1 the final score.

In the Women’s tournament only the Wineland Wings were assured of the semi-final spot but were quickly joined there by the Orange River Rafters when the Blyde River Bunters beat the St. Lucia Lakers. The 2-1 win inspired by Celia Evans again and gave themselves a hold of fourth spot for the time being. 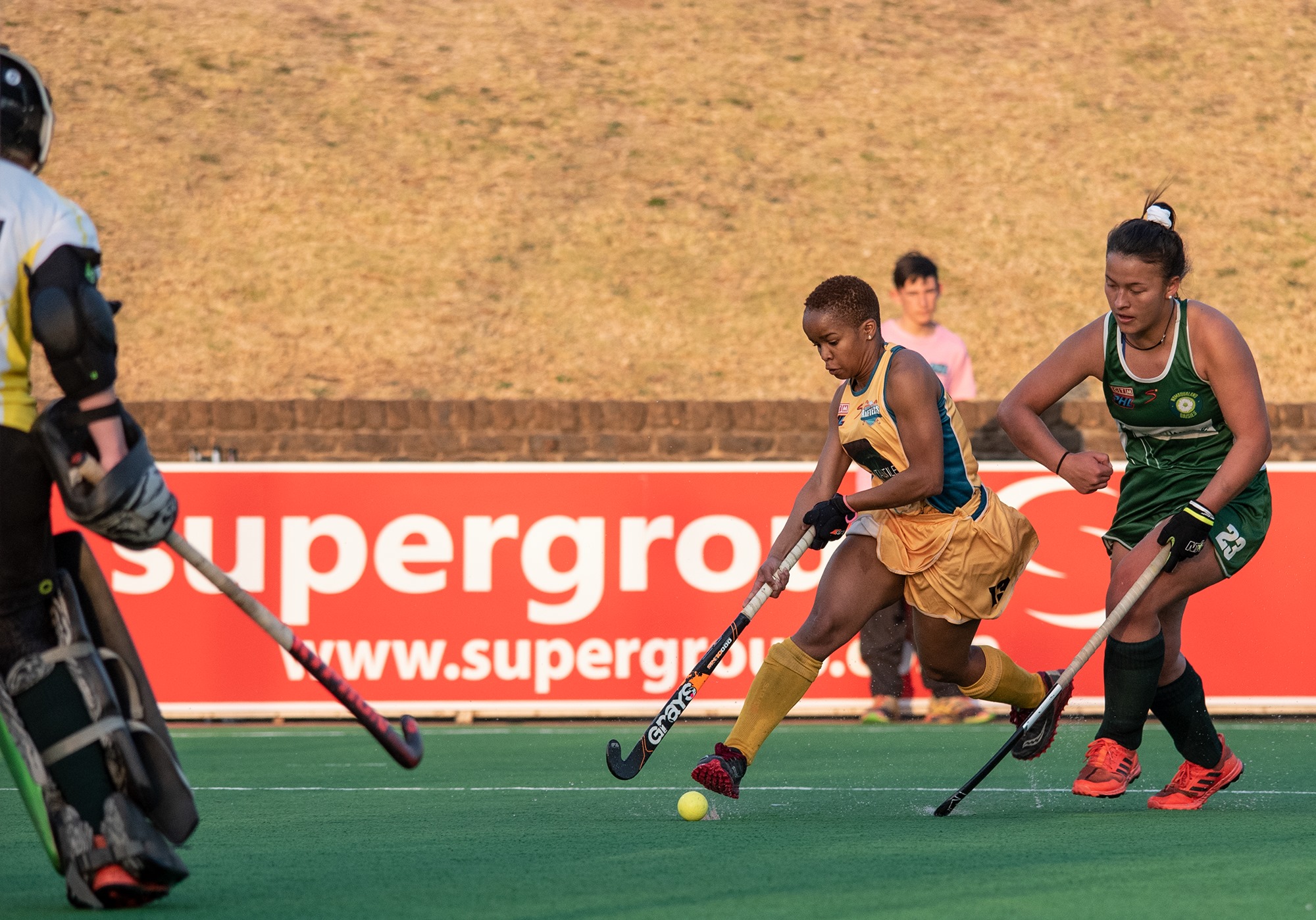 Former Wing’s player Stephanie Baxter had opened the scoring for the Lakers to put the Bunters on the verge of elimination but Celia Evans first and later Miecke Flemming turned the game on its head and confirmed a 2-1 win that eliminated the Lakers.

The Madikwe Rangers were then able to add their name to the semi-final list as Kristen Paton inspired the team to a victory to deny the Wineland Wings a perfect group stage. The seven-goal thriller was arguably the game of the weekend as both teams held the lead at different points and a last-minute winner decided the game.

The Rangers opened the scoring with a superb top right corner drag flick by Antoinette Louw, but early in the second quarter Jade Mayne forced the equaliser through a superb run. Mayne’s goal was the 200th in the CTM Premier Hockey League history. The Wings then completed an early comeback as Sylvia van Jaarsveldt celebrated her recall to the national team by catching Lisa Deetlefs in possession and finishing past Modipane.

Lisa quickly atoned for that error though as she went up the other end and finished off a penalty corner won by Toni Marks with a trademark slap. Deetlefs then finished her second with a slap into the opposite corner to make it 3-2 to the Rangers. The Wings then had a sensational save by Zimi Shange to thank for keeping it to one goal and rewarded her with a levelling goal through Stephanie Botha, the 50th women’s goal in this year’s PHL.

Zimi Shange then made another sensational save to keep the scores level but she could not deny Tamlyn Kock after more Paton good work and the Rangers had sealed their spot in the final four.

The last place in next weekends finals was decided in the final game of the group stage. After going into the break at 0-0 the Namaqualand Daisies were in dreamland as they took a 1-0 lead against the Rafters through an Ashleigh Thomas penalty corner.

It got even better for the Daisies when they took a 2-0 lead through Jean-Leigh du Toit with a bullet strike but the gave was given a breath of life when Charne Maddocks finished a goal mouth scramble with just 3 minutes remaining. The Rafters poured forward looking for an equaliser and pulled Cheree Greyvenstein off, but the gamble backfired as they conceded a last-minute penalty corner and Jean-Leigh du Toit made it 3-1 expertly. The Daisies had made the semi-finals and confirmed that for the first time in four seasons the Blyde River Bunters would not medal!